According to a study by the UKIPO, women inventors account for just under 13% of global patent applications. Equating to one female inventor for every seven male ones. However in our line of work at Caselton Clark, we work alongside patent attorneys and not the inventors and so we wanted to investigate if this gender disparity continued into the legal IP sector.

It is reported by the Intellectual Property Regulation Board that the proportion of female IP attorneys (28.5%) is markedly higher than that of female patent holders, but there is still room for improvement. First-hand we can attest to this as over the past few years of our placements of IP professionals, close to 33% have been female.

Unfortunately, there isn’t much data available on disparity between women/men patent attorneys in Europe and so it is necessary to focus on arguably the biggest reason for this deficit - the lack of women in the STEM industries (science, technology, engineering and maths). Which in turn means less women that follow the path from a science into qualifying as a patent attorney.

As it stands, only around a quarter of the workforce in the UK STEM industries is female. 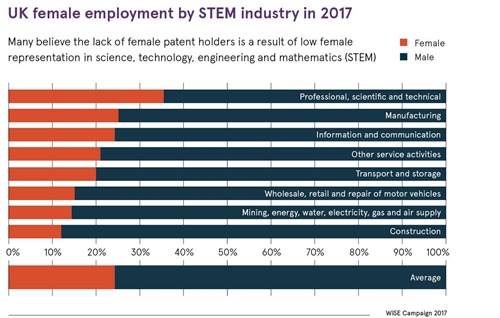 If we were to look back to the roots of this, starting at university degrees, we find that the majority of STEM subjects are dominated by men. According to a report by the Higher Education Statistics Agency, in 2016/2017 only five subjects studied at UK universities were dominated by men, the highest percentage being engineering and technology, computer science, and mathematical sciences, recorded as being at 81%, 81% and 62% respectively.

This is combined with there being a decline in interest in the sciences shown from girls at a young age. A study by Microsoft questioned 11,500 women between the ages of 11 and 30 across European countries. The below graphic shows that this interest peaks at around 13 years of age, but then drops-off dramatically after 15/16. 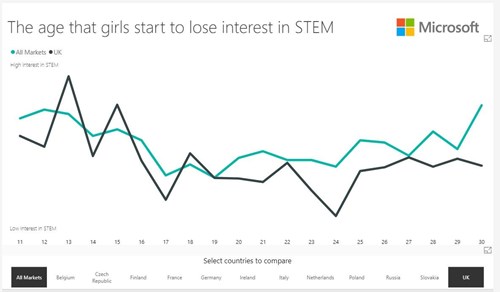 If improvements want to be made, then there is an incentive for a concerted effort to keep girls interested in the STEM subjects throughout their education, plus an effort to make IP career paths known early on. We spoke to a female UK Chartered Patent Attorney with a background in electronic engineering, and they agreed that more must be done to bring attention to the patent attorney career path saying “[girls] haven’t really heard of the profession”.

Clearly education, information and the provision of role models must play an important role in the uptake and use of IP across genders. A senior IP litigator agrees that the impact of influential role models in the IP sector can’t be underestimated “For example, when assessing career paths, there are very few female IP litigators to look to as a role model or a mentor”. The below graphic adds further weight to the importance of role models in STEM and having conversations with girls about the sciences. 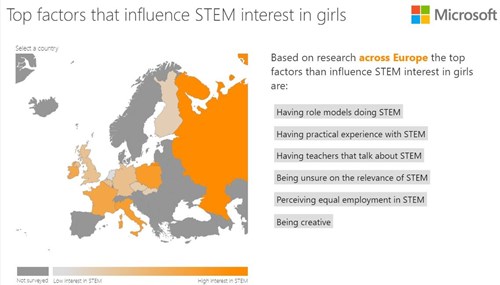 It also comes down to personal responsibility. If a person has a passion for the sciences or an IP career, they should not feel afraid or discouraged to follow this path, despite it sometimes being arduous. As Marianne Schaffner (Partners at Dentons – Paris) puts it “The IP world is a bit different from the rest of the legal market in that often women do trademarks and patents are reserved for men. In patent litigation, in the market women must prove more than men that we can deliver, as well as understand and argue on, technology.”

While there is certainly room for improvement, there are many recent positive steps being made in this space. Recently, the WIPO held a committee on the development of women in intellectual property and concluded that “more women than ever before are using the international patent system, though there is still a long way to go.” While urging the WIPO member states to give consideration to a list of points including to “share experiences relating to policies and practices to enable women and girls’ participation in the field of IP” and “share best practices for supporting women inventors and entrepreneurs and empowering women in IP management.”

You will find this happening at a smaller local level as well. IP firms will regularly promote what steps they are proactively taking to ensure gender equality in their businesses and highlighting aspiring women in IP, such as firm Partners and Associates who have climbed the career ladder. International Women’s Day in March of this year providing a good time for firms and business to promote what work they have done.

At Caselton Clark one of the changes we have seen in person over the years, that positively effects both genders, is in the increased readiness of firms and industry in accepting flexi-time working and the option of home-working for attorneys. In this year’s annual Caselton Clark Salary & Lifestyle Survey, when looking at the data we found that IP professionals increasingly want options of flexible or home-working when looking for a new job and that employers who refuse to offer some form of alternative working are going against the norm and will be the businesses potentially missing out on the best IP talent. As a lawyer, sometimes you must work on cases that require around the clock commitment. This can make it difficult for clients to understand how valuable flexible working is for some women – and men – for example, if they have young children.

The female patent attorney we interviewed agreed that flexi-working needed to be a point of focus for firms. She admitted that things are better than they used to be, but many employers still adhere to the viewpoint that a person must be focusing on their family or their job, with no chance of fluidity between the two. She highlighted that the care of children traditionally falls to the female in the relationship, and so rising through the ranks of an IP career is made more difficult than the male counterpart. “If you’re 20, it is easier to come into this industry” because you usually don’t have family responsibilities in your life at that time.

More work needs to be done, but today’s patent law practices and the IP sector is improving its gender disparity. There is an increase on women named in inventions, inspirational women in senior positions are being championed and there is a focus on getting girls involved in STEM at a young age.

During our research, we have formed the impression that there are more discrepancies at Partner-level in IP firms than anywhere else in the career ladder. The patent attorney we spoke to stated that “at partnership level it tends to be more male-heavy” and going so far as to say that the lack of women may be “more of a seniority thing than a gender thing”.

So we are interested in doing a follow-up to this in the near future with a look into the gender disparity in Partnerships at law firms, and perhaps the wider connotations of Partnership. If you would like to get in touch with us about this, then please feel free: