At the beginning of the month the UK Intellectual Property Office (UK IPO) released its Facts and figures document with information on patent, trade mark, design & hearing administrative data for the 2013 and 2014 calendar years.

The document provides an overview of the number of patents, trademarks and designs that have been applied for and registered in 2014 and gives us an insight into change from previous years.

Vacuum company Dyson came in 2nd place for the number of patents granted in 2014 (Figures do not include European patents designating UK) with 122 patents granted. The company, always at the cutting edge of new technology across a number of markets, have been in the press recently with a new LED light that lasts for 37 years and have invested $15 million in technology that may significantly increase battery life for both smartphones and electric cars. Clearly it wouldn’t be a huge surprise to see Dyson featuring prominently in the 2015 facts and figures document.

The results for trademarks is perhaps the more significant result to come out of the IPO data. The report shows a steady increase of applications and registrations over the 5 year period of data as shown below: 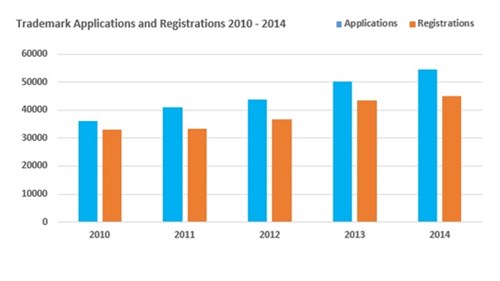 The results for 2014 show a large increase in applications for trademarks – up 8% from 2013. The number of trademarks actually being registered also saw another 3% jump on top of the 16% increase from 2012 to 2013.

The top 50 companies registered only 4% of the total number of trademarks with pharmaceutical giant Glaxo responsible for the most registrations.

It is always a challenge to know exactly the reason for the increase in trademark activity but the fact that the larger brands are only responsible for 4% of total trademarks show that more and more companies are becoming aware of the need to protect their IP assets. The importance of brand protection and its value as an asset is becoming more and more obvious. Cases like Sky TV v Skype, Taylor Swift, Rihanna and more recently the LEGO case have all featured prominently in the media.

These results tie in with our May blog post (Protecting your IP rights - are small businesses savvy?)  where we commented that there seems to be an increase in filings, an increase in competition between IP firms and a changing role for attorneys with more emphasis on business development and marketing.

Over the next 12 months we would expect to see a similar pattern with more and more companies protecting their IP portfolios and recognising these assets as a significant part of their value and net worth.

Is brand protection the driving force behind an increase in trademark filings?

Are companies becoming more aware of their intangible assets and the value in protecting them?